Antioxidants: Our Defense Against Free Radicals 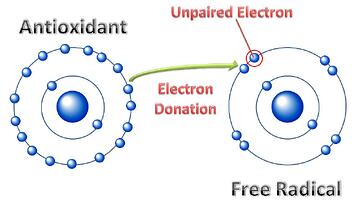 The terms “antioxidant” and “free radicals” are two of the most tossed around “buzz” words used in the health field today. What are they, and how do they effect our lives?

As researchers began to become interested in degenerative disease, aging, their causes, and how they can be prevented, they were lead to an interesting discovery. Our body and foods were already on the case. In fact, Hippocrates, who lived in around 400 BC, may have had the first insight. He said that in foods there are tiny substances that act on the body, and in some way change life. He went on to state that our lives depended on these changes. It amazes me, in 1996, just how “right on” Hippocrates was.

Our body has a built in mechanism to survive. With what it can manufacture for itself, and what food can directly supply, the ammunition depot is loaded. This is why food choices today can make a difference in your health tomorrow.Your body breaks down from foods, an army of micro-nutrients, of which antioxidants are a part.

Antioxidants delay naturally occurring chemical reactions we call oxidation, which are destructive in nature. They target primarily bad oxygen. When oxygen turns bad it is called a free radical. Free radicals are life long enemies that you can’t see, feel, or hear as they go through the body, leaving damage in their path. Damage which is noticed, only over time, on every organ, tissue, and cell of the body. The list of problems associated with free radicals is very long. Examples are: cancer, aging, heart disease, immune disorders, eye disorders, arthritic tissue damage, and various types of neurological degeneration.

What is a free radical?

The basic unit of matter is called an atom. Every atom has negatively charged particles called electrons, whirling around a core in orbits. The combination of two or more atoms is called a molecule. Each molecule is given a chemical name based on its combining parts. Molecules are held together by weak electrical bonding.

If an electron tears away from an atom, it becomes imbalanced, forming an unstable molecule. This is called a free radical. That is, a free radical is a molecule missing an electron, making it highly reactive. Because a free radical is unstable, it spins wildly, colliding with other molecules, stealing electrons, and causing injuries to biological tissues. The most abundant of all free radicals is oxygen. Is it not ironic that the very substance the human body cannot live without, can also cause the wearing away of the body’s defenses, weakening structures, inviting disease, and the aging of the body.

Some oxygen is just born bad. Some is formed as a natural byproduct of cell respiration. This type of bad oxygen generation is manageable compared to the number of free radicals formed by the environment. Environmental free radical oxygen is induced by cigarette smoke, air and water pollution, sunlight, pesticides, contaminants in our food source, radiation, and car exhaust to mention a handful.

Unsaturated fatty acids are everywhere. They are a component of every cell membrane, or cell wall. Cell membranes protect the inner workings of the cell from outside forces. Oxidation of fatty acids in the cell membranes can allow penetration of more free radicals and chemicals which induce free radicals into the cell. This puts the nucleus of the cell and hence our genes at risk. If DNA is damaged, mutations will be formed with can ultimately kill the host.

For the human species to survive, nature provided us with oxidation antidotes, consequently the name, antioxidants. Our genes make protein. The protein our genes make to protect against oxidation damage is called an “antioxidant enzyme.” Foods fight oxidation directly. Within foods are vitamins, minerals, and phytochemicals with antioxidant powers.

The body attempts to balance good oxygen and bad oxygen via its production of antioxidant enzymes, and the processing of food source free radical fighters. Unfortunately, the environment is drastically increasing free radical production, and, our lifestyles and nutritional intake are decreasing antioxidant availability. We must therefore be willing to take an active role in the war on free radicals.

The two forms of oxygen renegades are the superoxide radical, and the hydroxyl radical. The body makes an enzyme called superoxide dismutase (SOD), which searches out superoxides. This enzyme is dependent on the minerals zinc, manganese, and copper. While not common, poor eating habits could result in a reduced production of SOD. 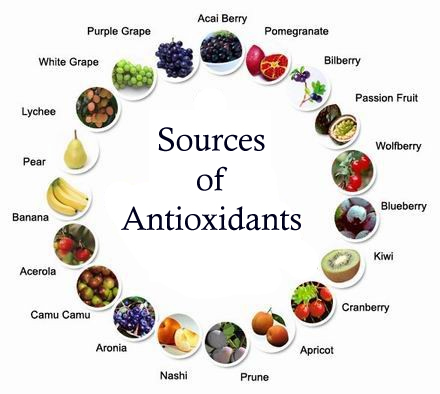 Food contributors to the war on free radicals come primarily from three heavyweights. Vitamins E, C, and the Carotenoids. Each contributes a unique, but synergistic effect. This team penetrates both the water based and fatty tissues and tissue structures.

Vitamin E concentrates in the fatty acids of cell membranes and fatty sheaths surrounding all nerve fibers. Its job is to hang out with its co- worker selenium, and ambush bad oxygen radicals before they can do their damage.

Vitamin C, being water soluble, circulates through blood and other fluids. This vitamin can be found almost everywhere, since our body is two thirds water. Think of vitamin C as the body’s anti-corrosion vitamin, as it prevents rust like oxidation causes on metals. The protective actions of vitamin C can be recycled in the presence of phytochemicals called bioflavanoids. Interesting enough, nature provides bioflavanoids with its vitamin C in the peels of citrus fruits. Unfortunately, that is the part we throw away when we eat the fruit. However, better vitamin supplements put them back in the tablet.

Nature seems to have held its own with modern science. Scientists can take us to the moon, split Cells are protected by their cell wall, or membrane. Constant pounding of this membrane by free radicals can produce a weakened leaky area. Now free radical producing chemicals, ordinarily held out of the cell, can penetrate it and attack the nucleus, or control center. Free radicals can now assault our genes damaging our genetic material responsible for normal cell division and propagation.

The cell can now be transformed into a mutant cancer cell. This one cell is all that it takes to start the ball rolling. It multiplies quickly and encases itself into a protective sheath protecting itself from the immune system. The immune system, witch itself may be weakened from free radical bombardment, may become helpless to the cancer avalanche, and a tumor is born.

While it is not reasonable to think that taking antioxidants will guarantee a cancer free life, the association between cancer risk and a diet high in antioxidant rich fruits and vegetables is undeniable. What you now take in food antioxidants, and what you could take in by either supplementation or improving your diet, or both, may be significant to your health.

Your heart muscle can easily be separated from its supply of oxygen and nutrients by clogged arteries. It is believed that people who increase their intake of vitamins C, E, and Beta Carotene may nearly stop hardening of the arteries, a major factor in death from heart disease. These antioxidants work by slowing the damage caused by cholesterol to the artery walls. Bad cholesterol, low density lipoprotein (LDL), in its rancid or "oxidized" form, is what clings to the artery wall, gumming up the pipes.

I hope that heart disease and cancer never touch you life. But, I can guarantee you that aging will. The process is beyond human control, but the rate at which it progresses can be affected. You can probably, to some extent, slow the effects of aging. The nucleic acids RNA and atoms, invent the micro chip and perform magic with computers. But what they can not do is reproduce foods as simple as an apple, orange, or carrot.

DNA is the body's cellular blueprint. The DNA found in every cell contains all the genetic information necessary to produce an exact replica of that cell (actually, it contains the genetic blueprint for the entire body). RNA is, more or less, the worker that rebuilds the cell based on the instructions it receives from the DNA. Anything that can be done to protect RNA and improve its function may result in improved cellular repair and extended cell life.

Supplements of RNA/DNA (commonly from yeast or glandular sources) may provide important antioxidant protection to the nucleic acids in our own cells. As a matter of fact, in studies where laboratory rats were given supplemental RNA, life span was extended by 20%. The positive results from this study were attributed to the antioxidant effects of RNA. (RNA should not be used by individuals with gout. When nucleic acids are metabolized, uric acid is formed. High uric acid levels can precipitate gout in individuals with a predisposition to this condition.)

In addition, a myriad of other antioxidants should also be used. The body, through its life, continues to produce endogenous antioxidants. However, as we get older, we make less. As we age, we continue to eat antioxidant foods, but we lose a bit of our ability to process out the micro nutrients we need in terms of digestion and absorption. Our bodies want to keep repairing itself, but become less efficient at doing so. This is where supplementation becomes most important.

As free radicals attack the skin components, collagen and elastin, its cell structure is disrupted. Sagging wrinkled skin is what we see over time. As free radicals attack collagen in the eye, vision is clouded in the form of cataracts. When a tiny area of the retina, called the macula, degenerates, vision becomes blurred and look at aging as a complex series of insults to our body on a cellular level, over time. Then, look at antioxidants as a series of insult blockers, supplied in adequate amounts, also over time. I believe, in an effort to make sure the body has all the antioxidants it needs, in taking supplements throughout life. There is no such thing as being too young to take antioxidants, and it’s never too late to start.