Supplement of the week: Designs for Health S-Acetyl Glutathione Synergy 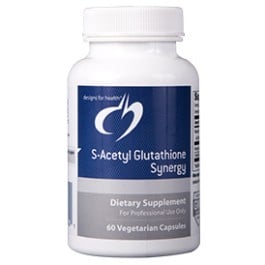 Acetylated form of glutathione for optimum absorption and bioavailability

This product also includes N-acetyl-cysteine (NAC) and vitamin B6, both of which are important for the production of glutathione.

S-Acetyl-Glutathione Synergy is ideal for viral conditions and for more intense therapy when higher doses of glutathione are recommended. Not only has it been shown to remain stable in the gastrointestinal tract, but it also has a longer plasma half-life with improved ability to enter cells and raise intercellular glutathione levels more efficiently.

Does not contain gluten.
Color, size or shape may appear different between lots

As a dietary supplement, take two capsules per day, or as directed by your health care practitioner.

STORE IN A COOL, DRY PLACE.