What Are The Autoimmune Diseases? 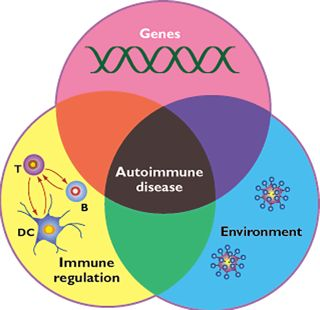 Autoimmune Diseases are becoming more and more prevalent in our world. It is estimated that somewhere between 14 - 25 million people in the United States are affected by an autoimmune condition (that's about 8% of the population).  And that number is rising.

An autoimmune disease is an illness where defects in the immune system cause it to attack its own cells, tissues and organs. It is difficult to pinpoint exactly the cause of autoimmunity. However, it is believed that one third of the risk factor is heredity and genes. The other risk factors include environmental triggers and lifestyle choices like nutrition which may affect the health of the immune system.

More women than men are affected by autoimmune conditions. In fact these diseases are the leading cause of death amongst the young and middle aged women. Most frequently they occur during the childbearing years, perhaps even triggered by pregnancy. Autoimmune conditions tend to run in families, hence the heridatary factors previously mentioned.

Common autoimmune diseases are Rheumatoid Arthritis (RA), Multiple Sclerosis (MS), Lupus, Type 1 Diabetes, Irritable Bowel Disease (IBD) and Celiac Disease. But there are over 80 of these chronic, and often disabling, illnesses of the immune system.

It is common to attribute the origin of these diseases to the affected organs. For example, many think that Rheumatoid Arthritis is a disease of the joints. However, it's essentially an illness of the immune system that just happens to be attacking the joints.

There is no known cure for autoimmune diseases. However, the functional medicine approach attempts to control the frequency and severity of the attacks. Those with autoimmune diseases experience flare-ups of the condition with times of calm in between. The flare-ups tend to get worse as time passes. And the results of destroyed tissue produce greater symptoms as years go by.

By making good lifestyle and nutritional adjustments, the autoimmune sufferer may be able to slow down the progression of the condition and also better manage its severity.

Would you like to discuss nutritional approaches to managing your autoimmune condition? Sign up today for a FREE 15 minute virtual consulation with Primo Health Coach!