I just came in from tending to my heirloom tomato plants in my garden. They've grown as tall as me (5ft 6in) and are filling up with their tasty sweet fruit. These tomatoes nutritional value and health benefits are numerous. So before tomato season is heavy upon us, let's discuss these benefits and even potential problems with consuming this fruit.

In the botanical sense, a tomato is considered a fruit. Because the tomato is not as sweet as other fruit, it is most often considered a vegetable. In fact the United States Supreme Court ruled in 1893 that the tomato is officially a vegetable. You say tomato, I say to-mah-tow... it doesn't really matter how you classify it when we are looking at the nutritional value of this roundish bright colored fleshy food. I can't even specify the color or the size because there are so many different varieties of tomatoes with varying colors, shapes and sizes that I would be misleading you. The most common color, of course, is the red tomato.

The tomato originated in Central and South America and was later brought by colonists to North America and finally Europe where it quickly became a staple food in their diet and became widely cultivated. This happened in spite of the widely held belief that this plant was poisonous. The leaf of this plant in fact is poisonous. And the tomato itself is a part of the nightshade family of plant foods along with potatoes, eggplants and bell peppers. Some who are sensitive, especially those with arthritis, may have reactions to eating nightshades including tomatoes. For these individuals it is recommended to avoid all nightshades. For the rest of us, these bountiful fruits have inherent nutritional value that should not be feared. 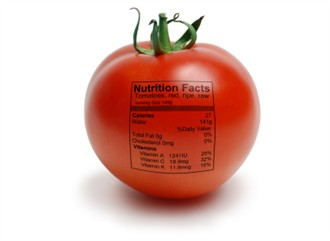 The tomato is a low calorie food that is best eaten when fully vine ripened. A fully ripened tomato can have up to four times the beta carotene of an unripened tomate. They are an excellent source of antioxidants like Vitamin C and carotenes. Tomatoes also pack some biotin and Vitamin K. The carotene lycopene plentiful in tomatoes is believed to provide amazing cancer prevention abilities, especially in men and against prostate cancer. Other nutrients in tomatoes include Vitamin B6, pantothenic acid, niacin, folic acid and dietary fiber.

Eating tomatoes with olive oil, or cooking them, releases more of the lycopene so that it is more available for absorption by the body. Be careful when purchasing canned tomatoes, as their high acid content has a tendency to cause corrosion. Cans from countries other than the US have more lienient laws against the use of lead in cans. The lead in these cans will likely leach into the food and are then absorbed by the body when eaten. Cans in the US may be safer against lead poisoning, but they do contain endocrine disruptive BPA's, which also should be avoided. Your best bet would be to stock up on tomatoes when they are in season. They can be canned in mason jars, whole or in sauce form. Or as my mother likes to do it, they can be steamed, peeled and frozen for later use.

Don't be afraid to try the many heirloom varieties that are available in late summer. Try purple, yellow and orange tomatoes with your next salad. Homemade tomato sauce is not difficult to make and is much healthier for you than the high-fructose-containing varieties. Tomato sauce (ketchup) is also an excellent way to get those healthy lycopenes and prevent cancer and hypertension.

Antioxidants are best derived from a variety of fruits and vegetables and as a part of a whole foods diet. However, supplementing with nutrients may be necessary in combating chronic illness or overcoming deficiencies. The best way to determine your nutrition status is through blood chemistry analysis. Sign up for a FREE Blood Chemistry Consultation.