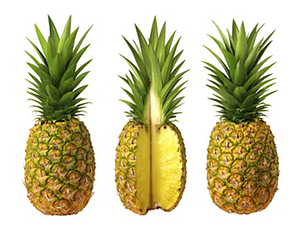 Bromelain is a proteolytic (i.e., proteindigesting) enzyme found in pineapples. Bromelain has proteolytic action on a variety of proteins, breaking them down into smaller peptides and amino acids1. Beyond its protein digesting capacity, research has shown that bromelain has anti-inflammatory activity. This is not surprising since different proteolytic enzymes, including bromelain, have been used to treat a variety of inflammatory conditions including sports injury and other acute trauma. Positive results have been observed over a thirty year period in both animal models and human trials.

For example, at least four studies using bromelain have demonstrated its effectiveness in the treatment of minor injuries (bruises, sprains, strains, hematomas, lacerations, abrasions) as well as severe injuries (low back pain, fractures, minor surgery).2 Research has also shown that this enzyme was effective at decreasing the inflammation and edema resulting from surgery and injury.3 Furthermore, there have been positive reports in a few clinical trials of bromelain to decrease thrombophlebitis (inflammation of veins) and pain from angina and thrombophlebitis.4 5

One unexpected application for bromelain anti-inflammatory benefits has been to relieve symptoms of acute sinusitis. In a double blind study comparing the use of bromelain with placebo, 87% of those patients who took bromelain reported good to excellent results compared with 68% of the placebo group.6 Other double blind research has shown that bromelain reduces symptoms of sinusitis.7 8

Other research on bromelain has revealed that this proteolytic enzyme acts naturally as a blood thinner agent since it prevents excessive blood platelet from clumping together,9 which would otherwise cause “sludgy” blood. Also, this enzyme appears to be effective for people with a urinary tract infection (UTI). In one double blind study, twenty-eight individuals with a UTI received antibiotics plus either bromelain or a placebo. Signs of infection resolved in all of those who received bromelain, compared with only 46% of those given placebo.10

Studies conducted in the past have used bromelain compounds with therapeutic strengths measured in Rorer units. Potency of contemporary bromelain compounds are quantified in either MCUs (milk clotting units) or GDUs (gelatin dissolving units); one GDU equals 1.5 MCU. A supplement containing 500 mg with a labeled potency of 900 GDU per gram would have 450 mg of GDU activity. Nutritionally oriented physicians sometimes use about 2000 GDU taken three times daily for several days, followed up 1340 GDU daily.11 This would translate to five 500 mg tablets of 900 GDU/gram bromelain, three times daily, followed up by three of the same tablets daily for maintenance. Much of the research conducted has used smaller amounts likely to be the equivalent (in modern units of activity) of approximately 335 GDU taken four times a day.