Supplement of the week: Designs for Health Thermo-EFx 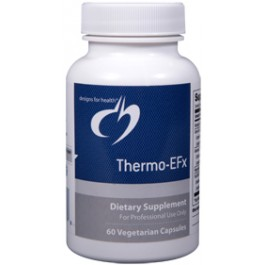 Thermo-EFx is designed to support healthy weight loss by helping to increase the body’s metabolic rate safely without causing any stimulant-associated side effects often seen with other weight reduction formulas.

Shown to increase thermogenesis and basal metabolic rate (BMR)
Contains adrenergic amines, agents that mimic the actions of the sympathetic nervous system with no stimulant-type side effects. These amines help to stimulate metabolic processes while increasing lipolysis (breakdown of fat).
Advantra Z® is the only bitter orange extract standardized and purified to contain primarily naturally occurring p-synephrine while having negligible amounts of synthetic m-synephrine. P-synephrine is an analog of adrenaline but has no side effects associated with it, unlike m-synephrine which is undesirable because of its stimulant-type side effects.
Fucoxanthin (as FucoPure®) derived from wakame seaweed (Undaria pinnatifida)

Shown to be a non-stimulant thermogenic
Animal studies demonstrate its ability to oxidize fat and release energy by adaptive thermogenesis within white adipose tissue, the type of fat responsible for excess weight gain.
The decrease in body weight from fucoxanthin is shown to be unrelated to any dietary or caloric changes
FucoPure® is the most purified extract of fucoxanthin available on the market. The proprietary purification process reduces the content of heavy metals and iodine in the seaweed to insignificant amounts without diminishing its beneficial qualities.

Does not contain gluten.

As a dietary supplement, take one capsule perday before a meal, or as directed byyour health care practitioner.